Beware of this company. Don’t Use Their Product!

I signed up in July 2022, paid the first month charge for $19, and received my 19,000 writing credits. One of their options to pay was PayPal, where I don’t have an account. However, one can pay as a guest using a credit card, which I did.

PayPal handles recurring billing for a merchant, and paid my August and September payments by charging my credit card, which they did. Somehow, PayPal and/or Writesonic messed up and my payments can’t be found.

To show Writesonic that I had paid, I made copies of my credit card charges and sent them to the support person I was dealing with. Through a series of e-mails, he/she said nothing could be done without a transaction number. They can’t find the payments on their end, and even though I sent them copies of the charge to my Visa card, they refuse to allocate my monthly credit amounts unless I can provide them with the transaction number from PayPal.

I don’t have a PayPal account, but I had paid as a guest, which means PayPal can’t give me a transaction number. Any company with ethics and morals or concern for a customer wouldn’t act in this manner. My strong advice is to stay away from them and use one of the many reputable companies selling the exact same product.

Writesonic literally stole two months of payments and are probably happy about it. The support person essentially said no transaction number – you haven’t paid! Just so anyone wants to see proof, attached is what I gave Writesonic. I’ve disputed the two charges with my bank, but that isn’t the issue. It will take a while to resolve, and should have never escalated to this point. 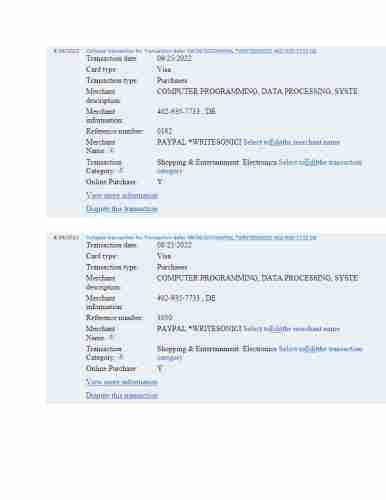