The Student Loan Crisis is Worse than We Realize 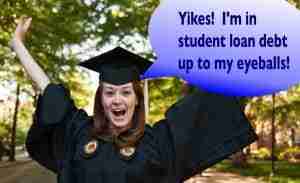 PinRecent publicity comparing the increase in student loan debt to credit card and auto loan debt indicates how serious the problem really is. In 2017, outstanding student loan debt passed the $1.31 trillion dollar figure. That and the following facts and statistics will tell anyone that we have a student loan crisis.

The figures are bad enough, but how does all of that debt affect the students who must borrow to get a college education?

Over the past twenty years, approximately fifty percent of students who graduated with a bachelor’s degree, saw a tremendous increase in student loans. As an example, in 1994 the average student loan debt was slightly more than $10,000.00.

In 2017, the average more than tripled to $37,172.00. Does the word stress sound familiar? To make matters even worse, many graduates are unable to get a job in their degree field.

This has essentially placed much more of the burden on the families of students who have to borrow more. Simply put, even though the government receives additional tax revenue from college graduates, they are not paying their share of the additional college costs.

Students from moderate and low income families are hit the hardest. Because average family income has not increased appreciably for the past six or seven years, students have to borrow more or enroll in lower cost community colleges. This has also attributed to the overall decline in students receiving a bachelor’s degree from lower income families.

Some alarming facts behind the numbers

A recently published policy paper stated that student loans could be considered affordable based on the following scenario. A student who had an increase in income due to their college degree, was able to repay their entire student loan in ten years with 50% of their after tax increase in income.

As an example, the National Association of Colleges and Employers has found that in 2015, a bachelor’s degree in the humanities, had an average salary of about $45,000.00 for a new graduate. That amounted to about a $9,000.00 after tax increase over a high school graduate. If you take one half of that figure, or $4,500.00, that would be approximately sufficient to repay a student loan of $35,000.00 over a ten year period.

Some say that as a general rule of thumb, a student’s annual starting salary should be more than their total student loans when they graduate.

Unfortunately, many students don’t pay much attention to that. Some have their minds set on one of the high priced colleges and they simply borrow more. They could attend a community college in many cases and reduce the amount needed to borrow. .

Some alarming statistics on the student loan crisis

These figures are fairly current for 2017:

If a bank had a loan portfolio with those statistics, the banking regulators would place them on the watch list and probably suggest that they look for a merger partner.

Many students who graduate from college with excessive debt say that their education was not worth the high cost. Some have had to delay their plans to buy a home, get married and raise a family. Others have had to change their employment plans because they couldn’t find a job in their degree field. Many have taken on a second job to meet their expenses.

Firstly, the federal government needs to be on the same page as the colleges when it comes to increasing college costs. They also need to be aware and maintain accurate records of those students who have excessive debt when they graduate. Student loan counseling could be improved with this valuable information.

Administrators of college financial aid must be allowed to reduce a student’s federal loan amount based on the academic major and enrollment status. For example, a half time student would not be permitted to borrow as much as a full time student. The problem here, however, is that the college is focused on filling every seat to cover their overall costs.

There needs to be national awareness of college costs and the reason for it, and appropriate action taken. Students need to be counseled on student loan borrowing and the possible ramifications of excessive debt.

There are additional suggestions that you may have to alleviate the current student loan crisis. Your comments below will be greatly appreciated.